During my “blog silence” my family managed to acquire cat #6.

How does this keep happening?

I don’t know. Maybe there’s a sign on my house that says, “Crazy Cat Family: Free Food and Love.” Sadly, it’s probably because people are shit heads and think because they have fur and claws they can fend for themselves in the wild. 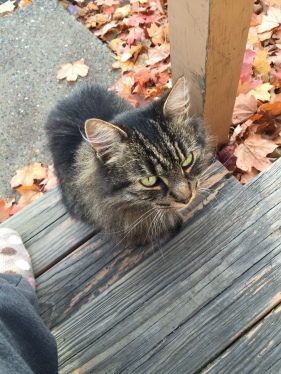 This cat appeared on my doorstep in Autumn 2015. As you can see from the photo, she’s a fancy, fluff cat. Not usually the kind of stray hanging around. At first, we assumed/hoped, that she was lost and her family would take her back in.

Month after month went by and every day she appeared at my door.  We checked the neighborhood signs for missing cats and she wasn’t there. I checked the usual on-line places and found nothing there either.

Younger son often found her running around our driveway at 3:30 am on his way to work, so that confirmed for us that she had no place to go.

Each day she got a bit more raggedy and knots were forming on her lovely coat. My husband, sensing (correctly) that we were about to take in cat #6, dug in his heels and declared, “No more cats.”

Come on, we all know what happens next. Right?

We’d made a few attempts to coax her into the house that winter but she wasn’t ready. Then, February arrived and along with it, bitter cold. Valentine’s Day morning the wind chill was negative 24 degrees. I was seriously worried that she wasn’t going to make.

By some strange twist of fate, Hubby was camping with the Boy Scouts (annual Klondike Derby) so he wasn’t around to stop what happened next.

Younger son saw kitty on the step that morning and calmly picked her up and placed her in the house.

Naturally, she freaked like she had during past attempts. This time, we didn’t care. We weren’t letting her go back into the bitter cold. Eventually she settled in my older son’s room, where she is now happily embedded as the queen of the room.

And, no, we don’t feel sorry for taking her in.  She is happy, content and as spoiled as the other cats.

I have promised hubby that we wouldn’t add a number 7. 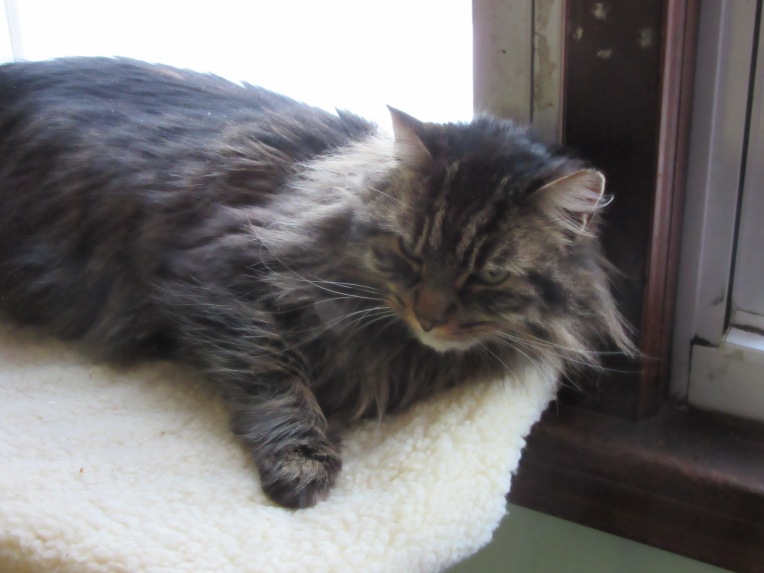