Writers are often asked – “What inspires you?” In the past, I’ve shuddered at the question largely because, to non-writers, we seem to have some kind of magical powers. That the universe has blessed us with a special gift that enables us to come up with more ideas than everyone else.

Well, surprise. We don’t have magic powers or a special gift from the gods. Most of the writers I know don’t suffer from a lack of ideas. In fact, we often have too many ideas zipping around in our heads. Why is that? I’ll get to that in a second.

For me, I have loads of ideas for stories. Tons of them. Sadly, most will never see the light of day. There isn’t enough time to fully explore them all. And not all of the ideas are good ones. So, the stories that do get written are the ones that stay with me. The ones where the characters rap me on the noggin’ and say, “Tell my story. Or else.”

So back to the earlier question – why do writers seem more inspired than the average bear?

Here’s my theory – everyone, and I do mean, everyone, has ideas all the time. Most people are afflicted with “adulthood.” They’ve repressed their childlike sense of wonder. There are too many reasons to list why this happens (life happens: family, kids, work, or they have loads of doubt or maybe they don’t care – take your pick).

One of the things I had to learn was to not ignore ideas. To seize them no matter how crazy they sounded. To not over-think them or talk myself out pursuing the idea. Hey, it’s okay to let your imagination run herd. Just do it!!

With that said, while I have no problem with coming up with an overall plot, I can get stumped with actual circumstance (i.e. scenes). And I’m always worried that I might repeat myself and rehash the same ideas over and over. And, really, who wants to do that? Not me!

Then one day, Chuck Wendig (Terrible Minds)  ran a blog post about Christmas gifts for writers. One of the gifts was Rory’s Story Cubes. Designed to be a game for kids, it’s basically a set of dice with pictures. You roll them, then make up a story. And the best part, anyone can play. Anyone (yes, even us jaded adults).

How fun does that sound??

I think it sounded pretty cool. So when I happened upon a set in Newbury Comics, I ponied up the $9.99 and brought them home. And if you don’t want to have physical dice, yes, there’s an app for that. Rory’s and other story dice apps are available at iTunes, Amazon and Google Play (just search under – story dice).

My plan is to use them whenever I find myself trying to spice up a scene or re-work a plot point.  So, while writers don’t invoke magic powers, we can roll story dice and see what comes up.

Who wants to play?

I’m rolling four dice . . . and go! Tell a story that connects each dice, starting with Once Upon a Time  or In a Land Faraway or whatever floats your boat. . . 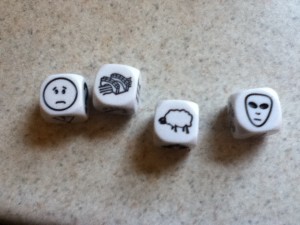 They smell great!
Bye Monday!
More fruit picking fun at @ezpickinsorchard
Out and about
Hello. (From Nene)
It’s Caturday, woot!
Loading Comments...
%d bloggers like this: