Misfortunate Soul (The Ashworth Legacy Book 2) is live on Amazon!

In honor of the big day, my publisher is offering book 1: Misfortune Cookie for free until 10/5/19. Click here to get your copy.

Misfortune Cookie has never been on sale or free before and I don’t know when or if my publisher will offer it again.

In other news, I’m looking for beta readers willing to leave reviews over at BookSprout for a contemporary novella – Rewrite the Stars. Click here. Space is limited, serious reviewers only, please.

Please do check out the other books in both promotions!

Today is the day where I reveal the answer to this question. Five years ago, when Cherry’s first story came out (now titled Dead Girls Don’t Cry), I

started the next story, I Know Why the Dead Girl Sings. The document consisted of a single scene and that was pretty much it.

Fast forward to 2016, with book one’s rights reverted back, I realized I needed to write a second book, pronto.  Which I did. It took longer than I wanted or expected. Oh well. I got it done but the title had to go because it was too long. Now it’s the name of a chapter instead.

When we last saw Cherry, she’d retired as colony leader and, with a baby on the way, was ready to settle into a quieter life. But then a strange spaceship laden with mysterious revenants landed…

Whatever could go wrong?

As to why dead girls don’t sing, fear not, Cherry will explain all. And you can find out too because the book comes out today.

I am so excited to have Michael J. Sullivan as my guest at the 7 Scribes today. I was lucky enough to meet Michael and his wife as ConnectiCon a few weeks back. He was very generous with his time and it was educational for me. Michael actually self-published five out of six Riryia books before signing a deal with Orbit.

Since the convention, I have read the first book  – The Crown Conspiracy (LOVED it) and am now reading book two – Avempartha. Seriously, if you love fantasy or fun adventure stories, check this series out.

In other news, I am still cranking through Mystic Hero and Lachlan’s Curse. Progress was slowed by laziness during my vacation. I barely did any writing. But, on the flip side, I spent time with the boys and we had FUN!

Right now Mystic Hero is in the lead for word count. Sometime in the next week or so, I think I’ll be going full time with one novel until it’s done! Go Devlin!

(I’m cheating today. This is the same post over at the 7 Scribes. It’s going to be a scorching 99 here today. Stay cool

Welcome to another Friday! Casey here.

I’m happy to report that I crossed an item off my bucket list. It all started with a Kindle Daily Deal and a book called Theft of Swords by Michael J. Sullivan. Every day, since I purchased a Kindle Fire, I check Amazon’s Kindle Daily Deals (very much like a junkie looking for a fix).

This particular day, Theft of Swords was the fantasy offering. I downloaded a sample, was hooked by the first page and immediately purchased it. And, because I happened to be in Goodreads that day, I sent a friend request to the author.

Long story short, in addition to accepting my request the author sent me a note and we started a conversation that ended with him agreeing to be my guest, here at the Scribes, on August 9th (Yay!). While researching his various social media sites, it turned out

he’d been invited to ConnectiCon as a literary guest, along with Brandon Sanderson.

Now, my hubby and I have discussed going to this convention for as many years as it’s been going on. Each year, it has gotten progressively bigger and more exciting. When Michael suggested we meet up at the conference, I was happy to accept.

I’ve been to the Connecticut Convention Center before for other events, but none of them come close to the size and scale of ConnectiCon. There was so

much to do: panels, Q&A sessions, book signings, gaming, vendors, and parties. So much that we barely scratched the surface. Check here for more information.

The best parts for me aside from meeting Michael and his wife, were the costumes (more on those in a

moment) and encountering artist Dan Dos Santos. His artwork has graced the covers of Patricia Brigg’s Mercy Thomas books and Diana Rowland’s white trash zombie series (among many others). Super nice man and very gracious. While we were chatting, Brandon Sanderson came up to the table (squee!).

Now, those costumes – fabulous, fantastic, well-made, top-notch. What more can I say? The variety was mind-boggling. And for the amount of people attending, everyone was polite and relaxed. 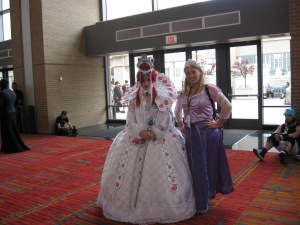 Overall, it was a great experience for me. Hubby was a bit overwhelmed by the sheer geekiness but there were plenty of comic book and movie characters. On the drive home, he was speculating what kind of costume he could make for next year.

So, if you live in the New England area (and even if you don’t) and if you love comics, anime, role-playing, manga, gaming, etc. don’t miss a chance to attend this con!

What Cons have you attended? What are your favorites? And if you haven’t ever attended one, would you consider it? 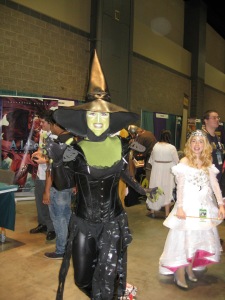 For Mystic Ink, I scheduled all the blog stops myself and quickly realized (far too late) that I am really not good at writing a zillion unique blog posts in a short period of time. And it totally killed my writing schedule.

So this time around, I decided to hire Goddess Fish to the do the work for me. They also set up an interview only tour. While I had to answer at least 2 interviews a day for a solid week and half (and it was a bit much), it’s much better than what I did before.

I hope you will stop by and leave a comment. At the end of the tour, I will award one lucky commentor a $25 Amazon gift card and e-book copy of Mystic Ink (either Kindle or Nook version).

I hope to see you there!

I hope everyone is having a wonderful Tuesday. I’m over at Janna Shay’s today to answer questions about my latest book. Please stop by and say hello!

Thanks for being patient everyone. The Undead Space Initiative is now available at Amazon and Barnes & Noble. 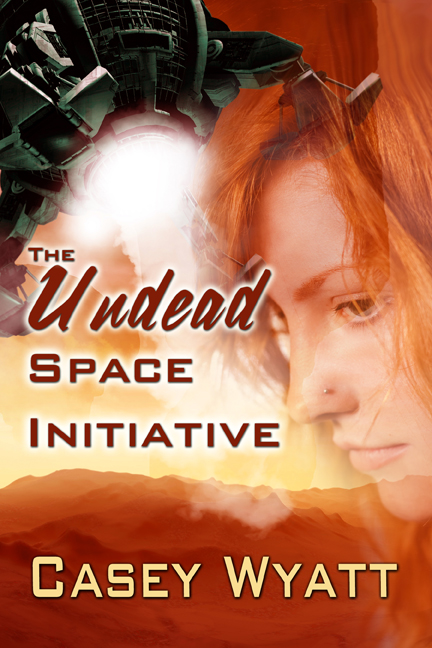 The Undead Space Initiative is on sale now at Pink Petal Books!

Once I have the Amazon and B&N links I will post them.

Jonathan spoke first. “We’re leaving.” He left me alone in the hallway with Ian.

“Cherry. Only Jonathan gets to use my real name.”

“Fine. Apologies.” Ian stepped close enough that I could see flecks of gold in the blue of his irises. “I haven’t been able to get you out of my mind.”

Stunned, I moved back. Ian had no idea how many men had said those exact words to me over the years. “There must be something in my ears. Did I hear you correctly? Are you trying to pick me up at a time like this?”

A slow smile crept across his lips, revealing pearly white fang tips. “Right. I bet you hear that all the time. What I should have said was I’ve been having these dreams—”

With a snort, I threw my hands up. “Okay. Stop right there. I don’t want to hear about your sick, twisted fantasies.”

Ian opened his mouth, no doubt to deny it, when his cell phone chirped. “Got to take this.” He turned his back to me and spoke low enough so I couldn’t hear him. Not that I planned on eavesdropping. I could care less.

Why should I stand around waiting on him? The family needed evacuating. I threw open the prop room door and the room was…empty?

No tunnel passage existed in the prop room.

“I bet you’re wondering right about now, where is everyone?” Ian said from behind me.

I whirled around and slugged him.

Thanks for your support! Happy Reading!

Well, it finally happened. A moment that I wished for and dreaded at the same time – our big screen television died. I admit for the last few years, I’ve had a serious case of TV envy. Everyone around us was upgrading to sleek, thin paneled models while we still had a big behemoth projection box. But there was no way we were going to buy another TV as long as the old one worked.

Then, a few weeks ago, the TV started acting up. I knew the symptoms. We’d had this brand before and it showed signs of imminent demise, the non-operable kind. I could barely contain my glee, but remained silent since I know Hubby would not be receptive to any TV replacement overtures.

When we bought our 50″ TV a mere eight years ago, it was not quite cutting edge HD, but it was better than what we’d had before – a 36 incher. A few years ago, we switched to ATT Uverse and started using the lone HDMI port and our picture got even better.

Earlier, I mentioned dread – that would be the cost of replacing the television. Well, we had to bite the bullet. The old TV died on a Sunday and there was no way I was missing all my favorite programs.

After cruising around our town comparing  features, prices, and the amount of HDMI ports, we purchased a new 60 inch HDTV at Costco. For good measure, I bought a blue ray player and Hubby added a sound bar.

Woohoo! We plugged that baby in and connected all the new toys and HOLY CRAP, we spent the entire day glued to the television. The picture quality was so incredible and different from what’d been watching that I thought my brain would overload.

The real mind freak moment came when we played a blue ray copy of Thor. We meant to watch just a few minutes for comparison purposes, but that didn’t happen. Two hours later and with copious amounts of drool (that would be mine – hello, shirtless Chris Hemsworth), we collectively realized that we’d re-watched the entire film.

And I awoke from my HD induced stupor and thought – crap! I haven’t written a thing today. Agggh!

After a week of – wow, look at that picture – I’m finally back on track. I completed the first draft of my new book. And surprise, it’s not Mystic Storm. Once I have the blessing of my excellent beta-readers, I’ll share more details.

In the meantime, in case you missed it –  here’s the cover to The Undead Space Initiative coming soon in July! I’m very excited to share this book with everyone.

And if you haven’t stopped by the Scribes today, I’d love it if you’d visit and join in the discussion  – Sex and Zero G.

Who else loves their TV set? If not, what is your dream/favorite gadget?

They smell great!
Bye Monday!
More fruit picking fun at @ezpickinsorchard
Out and about
Hello. (From Nene)
It’s Caturday, woot!
Loading Comments...
%d bloggers like this: